The Award-winning residential community that overlooks Lake Travis and borders the banks of Lake Austin has a long-standing reputation for being "exemplary". Today, this term refers to the public schools nestled between the greenbelts. In the past, however, it once referred to rodeo stock. 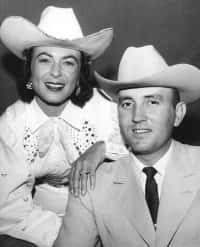 In its origin, Steiner Ranch was 5,200 acres of ranch land that was home base to the founders and livestock and of the Steiner rodeo company. Today's picturesque sidewalk-lined streets were once roamed by parade and bucking horses, bronco bulls and the herds of wild horses Tommy Steiner saved from elimination. On this land, foals and calves were raised. And so were little boys. Both grew up to shape the world of rodeo.

Steiner Ranch as we know it today got its start with a man by the name of T.C. "Buck" Steiner. Buck was a man of many enterprises. A Texan and a cowboy, it was fitting that Buck's business was rodeo, boots, and saddles. In the 1930's, The Capitol Saddlery, Buck's favorite business, turned out boots, saddles and tack sold through Montgomery Ward and Sears Roebuck catalogs. Some of these original Buck Steiner saddles are on display today at the Steiner Ranch Steakhouse. Others are still being slung on the backs of horses. The Capitol Saddlery is still in existence in Austin, continuing the tradition of handcrafted fine leather goods and custom boots for the most discriminating boot aficionados. Up until the time of his death in 2001 at age 101, Buck could be found behind the counter of the "saddle shop", where he lived and worked. As Buck's wealth grew from the proceeds of his many businesses, Steiner Ranch was just one parcel of land he acquired. It became the stomping ground of the next generations of Steiners and the animals that were their life.

In addition to the keeping the accounting books for the rodeo business, Beverly opened each Steiner rodeo with a spectacular horse-mounted arena presentation of the American flag. It's said that in over 30 years of rodeo, Beverly missed only two shows: once to a case of the flu and once for the birth of one of her sons.

The Steiner Rodeo Company was one of the first rodeo productions to bring the star quality of celebrities to the show, taking rodeo to the forefront of family entertainment that it's known for today. In framed photographs displayed in the tack room at the Steiner Ranch Steakhouse, visitors enjoy recognizing the famous faces that headlined the Steiner rodeo. 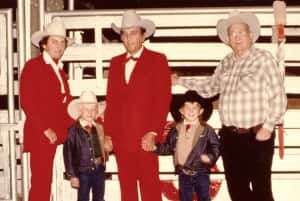 As the rodeo company and Tommy & Beverly's sons grew, young Bobby Steiner the 2nd of three boys, climbed onto bulls instead of school buses. Like his brothers, Bobby was tutored on the rodeo circuit while he traveled with his parents. By age 15, Bobby was worrying his mother and delighting crowds with impressive 8 second rides.

In the years to come, it was not just rodeo fans that Bobby Steiner impressed. Joleen Hurst In 1972, Bobby married Joleen Hurst, a beautiful, blond haired barrel-racing competitor from Oklahoma. As a newlywed, Joleen watched her husband achieve the title of World Champion Bull Rider in 1973.

When Beverly retired from rodeo in 1976, Joleen assumed the tradition of opening duties. In 1996, for his acclaimed work in rodeo production, Tommy Steiner was inducted to the Pro Rodeo Hall of Fame.

Under the watchful eyes of Bobby & Joleen, another generation of Steiner boys was growing up quickly. Like their father, grandfather, and great grandfather, they too would take arenas by storm.

Tommy Shane, the eldest of Bobby & Joleen's two sons, inherited his father's musical leanings. With his 2002 hit song "What If She's An Angel", Tommy Shane Steiner took #2 on the Billboard charts. Tommy Shane's music is the audio playing on this website. 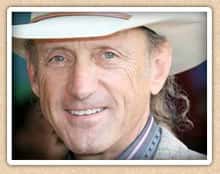 Youngest son, Sid, was gifted with his father's fascination for bulls. While his dad preferred to ride them, Sid grabbed them by the horns. Taking bulls to their knees, Sid achieved the acclaimed title of World Champion Steer Wrestlers in 2002.

Like his father before him, Sid also caught the attention of a beautiful, blond-haired barrel-racing competitor, Jamie Richards of Washington state. Sid & Jamie were married in 2001.

Today, both sons continue a new generation of Steiners with children of their own.

While the days of rodeo and rodeo champions are now colorful memories in the hundred years that is the Steiner legacy, the name Steiner and the XS brand will always be synonymous with the sport, the animals that make it exciting, and the men and women that make it a show.

Since November 2008, the widely recognized "XS" brands a new enterprise, the best steaks you can find anywhere.

Welcome to the Steiner Ranch Steakhouse.